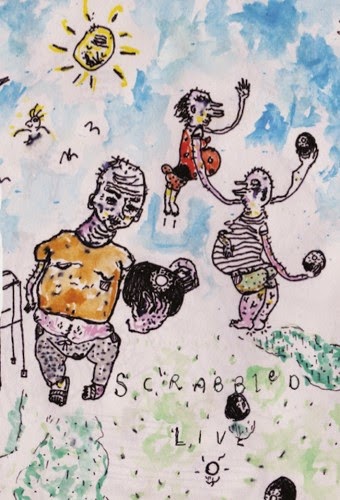 Recently added some tapes from Albert's Basement to the store. Check em out!


Scrabbled “Live” CS (AB 67)
Scrabbled’s debut tape on Virtual Cool completely won us over with its woozy anthems and wobbly punkish jabs. This here tape of live performances is a worthy follow up.  The vitriol is more up front on this one and one can SEE the anger and frustration on the two (!!!) versions of New Pig City, but the pop sensibilities are still very much intact. Best tape we heard since the last Scrabbled tape. Rumors abound of a full length on an American label.  $8

They Spunks “A Sporran of Carrots” CS (AB 68)
Psychotic back porch jams from Auckland of the highest order. Perfect for beer and horseshoes. They Spunks have been playing around for a while playing around for a couple years now. Hard to believe its taken this long for a recording to surface. The more surprising when you take into account the pedigree of the boys in the band (members of Axemen, Pumice, Constant Pain). $8

Sam Bakers “At Home” CS (AB 62)
Future anthropologists are gonna have quite the time making sense of this one. Hell, modern ones may scratch their heads too. This debut from Sam Bakers is one of the oddest releases from Albert’s Basement in some time.  Billed by the label as a comedy album, Bakers, a former member of Drunk Elk, delivers a feverish collage of the witticisms and/or delusions accompanied by a TV with bad reception and an AM radio.  $8

Elli and Bev "Might Not Look Like it to You" CS (QUE 011/AB 64)
Cassette version of the 12 co-release from Quemada and Albert's Basement. If you haven't heard it on tape, have you really heard it? $8

Go to the Quemada store to check out some sounds and to buy buy buy!
Posted by Quemada at 1:52 PM No comments: