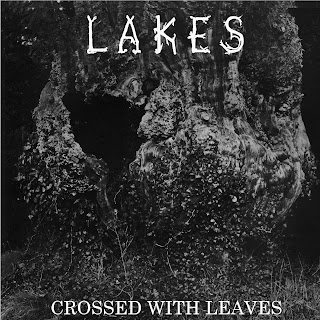 We are very proud to announce that the new single from Melbourne’s Lakes is ready and available for purchase. For the uninitiated, Lakes is the solo outlet for Sean Bailey’s not so cheery take on the world. Sean has been a constant in the Melbourne musical landscape for quite a while. In addition to running the Inverted Crux label he has played is such diverse group settings including, but not limited to, Paeces, Wasted Truth, Tax, and The (Australian) Vivian Girls.
Lakes is Sean’s bleak punk, dark folk creature. There is no mistaking the Lakes signature sound, but those who have been following Lakes' development over the course of 12 releases can attest that Sean has methodically built on to the gothic Lakes skeleton heard on the earliest releases to where we last heard from him on last year’s Winter’s Blade LP where the Lakes monster was given quite a bit of muscle in large part to a tweak in the recording process. This single picks up where Winter’s Blade left off with perhaps with an extra level of heavy and gloom applied to the structure. Listen to the A side here to see what we mean.

Posted by Quemada at 2:03 PM No comments:

Very happy to report we'll have a new single from Lakes ready for consumption on march 21st. You can hear the A side in all is glory right here.

If you find yourself in Melbourne on the 16th you can get yourself a copy at the Tote in Collingwood. 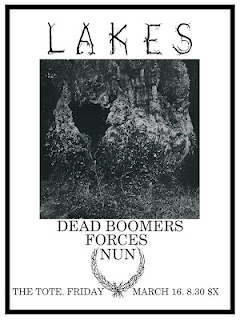 Posted by Quemada at 8:13 AM No comments: